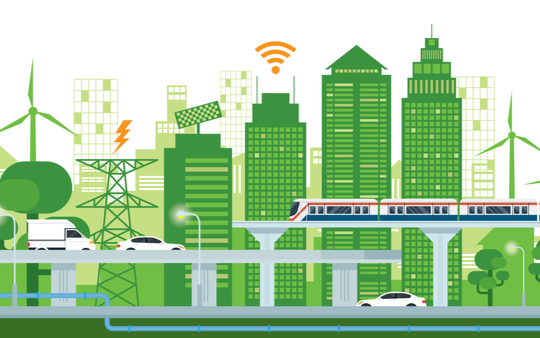 The Prime Minister’s highly awaited plan for a Green Recovery was released late in the evening of Tuesday 17th November, and signals a clear intention that the UK wants to be a world-leader in an array of clean technologies.

The plan is aimed at eradicating the UK’s contribution to climate change by 2050 and serves as a roadmap to the Net Zero Emissions target, enshrined by law.

The £12bn plan (with three times as much investment met by the private sector by 2030) includes the creation of 250,000 green jobs. The “green industrial revolution” also seeks to make the City of London the global centre of green finance.

OFFSHORE WIND
The UK will host 40GW of offshore wind by 2030, supporting up to 60,000 jobs with the prime minister stating: “We will make the UK the Saudi Arabia of wind”.

HYDROGEN
Turning water into energy with £500m being invested to generate 5GW of “low carbon” hydrogen production capacity by 2030. The government is seeking a town to volunteer for a trial of 100% hydrogen for heat, industry and cooking.

NUCLEAR POWER
From large scale investment in projects such as new reactors for the Sizewell plant, to small and advanced modular reactors (SMRs), £525m has been earmarked to support up to 10,000 jobs in the nuclear fission industries.

ELECTRIC VEHICLES (EVs)
Investing £2.8bn in EVs, improving charging points infrastructure and creating long-lasting batteries in UK ‘gigafactories’ in the North East, West Midlands and North Wales. This allows an end of the sale of new petrol and diesel cars and vans in 2030. However, the sale of hybrid cars and vans that can drive a significant distant without GHG emissions will be allowed until 2035. £582m of this is allocated for grants to be made available to incentivise EV purchases. The UK is now in second place in the race to decarbonise transport after Norway, which has a fossil fuel vehicle abolition date of 2025.

PUBLIC TRANSPORT
Cleaner public transport will be provided by a £5bn investment into thousands of green buses and hundreds of miles of cycle lanes and walking routes.

AVIATION AND SHIPPING
An innovation fund has been created for research projects in the fields of zero emission international travel and freight, including £20m specifically for clean maritime innovations at Orkney and Teesside sites.

PUBLIC SECTOR DECARBONISATION
Starting in 2021, £1bn will be invested to improve energy consumption in homes, schools and hospitals. Specifically, 600,000 heat pumps will be installed by 2028 leading to the creation of 50,000 green jobs in this area by 2030. The Green Homes Grant voucher scheme announced this September will also be extended.

CARBON CAPTURE STORAGE (CCS)
Long touted as a possible innovation for difficult-to-decarbonise sectors, £1bn has been committed to target the removal of 10MT of carbon dioxide by 2030 alongside another 50,000 jobs. The government aims for the UK to become a world leader in CCS technology. An additional £200m will create two “carbon capture clusters” in North Wales and Scotland by the middle of this decade, with a further two to be created by 2030.

BIODIVERSITY
The planting of 30,000 hectares of trees and the rewilding 30,000 football pitches’ worth of countryside (additionally, a further £5.2bn has been ringfenced to create for new flood and coastal defences in England by 2027).

FINANCE AND INNOVATION
A £1bn innovation fund for green finance to decarbonise the nation is aimed at helping commercialise new low-carbon technologies, such as the world’s first liquid air battery being developed in Trafford. The City of London the global centre for green finance through sovereign bonds, carbon offset markets and new disclosure requirements.

Many of the details of the plan will be written into an energy white paper proposing future legislation, which is expected to be published by the end of the month.

Critics say the £4bn allocated to implement the 10-point plan is far too small for the scale of the challenge. The question surrounding the impact of Brexit and its associated import tariffs on the delivery of EV batteries have also been highlighted. There are many arguments regarding nuclear energy’s place in the plan too, with opponents calling into question the massive cost undermining the focus on offshore wind. Contradictory plans such as the £27bn road-building program, which is set to increase emissions, have been pointed out, but the plans have largely been well received as a bold and welcome step by many green groups.