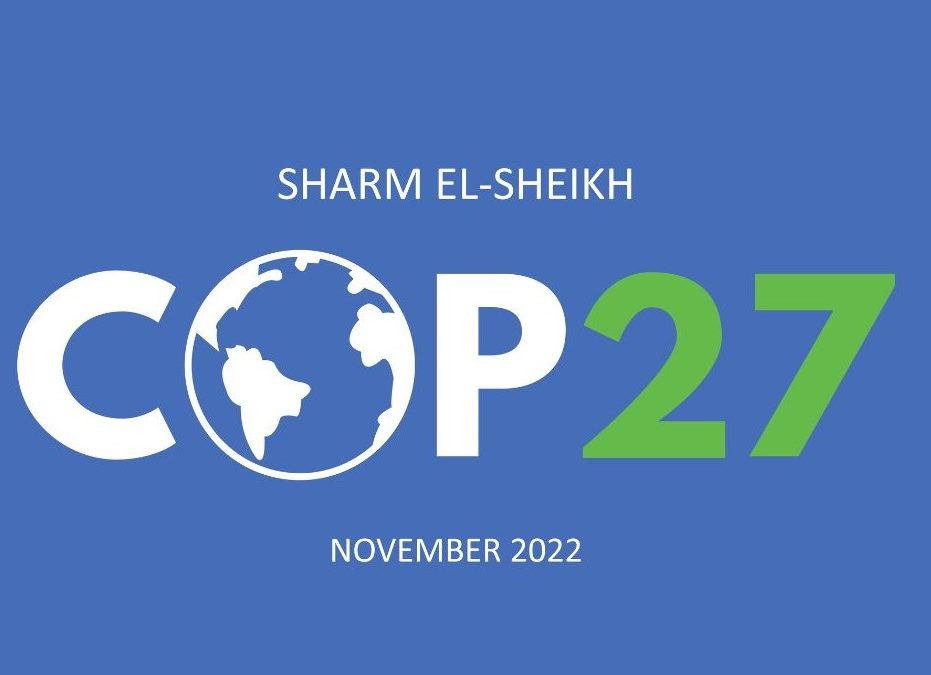 COP27 is taking place in Sharm-El-Sheikh. It began on Sunday 6th November with world leaders from over 170 nations, alongside tens of thousands of attendees including Diplomats, Ministers, Negotiators, Business Leaders Activists and Sustainability Groups.

Last year, at COP26 in Glasgow there was a collective commitment to update Paris Agreement commitments within 12 months and the Glasgow Climate Pact was signed agreeing to action on fossil fuels. However, with the energy crisis impacting supply over the past year and political unrest, largely due to Russia invading Ukraine, it has been difficult to envisage further progress in the reduction of the use of fossil fuels.

As the agenda was agreed on Sunday, it was the first time that loss and damage, compensating low-income, low-emission nations for climate damage impacts, was formally placed on the list. This topic has caused much debate and became a key sticking point at COP26. It is likely to cause further consternation with key nations including the US, UK and the EU adamantly opposed to creating a loss and damage finance mechanism this year, wanting to push this out to 2024 to enable further discussions.

The first two days are dedicated to the World Leaders, allowing each to take to the stage to give their opening address. Whilst some opening speeches were seen as bold, the UK Prime Minister, Rishi Sunak, was described as ‘lacklustre’ which will further disappoint given that he declined the invitation to the summit despite his predecessor, Boris Johnson, attending and taking the stage. Rishi’s lack of commitment in his address was not received well by environmental campaigners.

Among those fronting up the speaker agenda was Mia Mottley, who gave typically bold speeches.

Some notable comments came from the UN Secretary-General, Antonio Guterres, who said that “we are on a highway to climate hell with our foot on the accelerator,” calling for world leaders to ‘cooperate or perish.’ He singled out the USA and China, the two largest emitting nations in his harsh words. Barbados’ Prime Minister Mia Mottley described a lack of political resolve for change, saying she “takes no pride” in having to repeatedly drive home the importance of capping the global temperature increase at 1.5C when faced with those who will not make the crucial change.

On day two the Egypt COP27 Presidency launched the Sharm-El-Sheikh Adaptation Agenda in partnership with the UN Climate Change High-Level Champions, and the Marrakech Partnership.

The Programme lays out a comprehensive global list of requirements with thirty ‘Adaptation Outcomes’ to help protect those four billion people living in the most climate-vulnerable communities by 2030. There are five ‘impact systems’ including food and agriculture, water, and nature, coastal and oceans, human settlements, and infrastructure, with solutions for planning and finance.

On Friday, the International Organisation for Standardisation (ISO) published a net-zero ‘Guidelines’ paper intended to be a “single core reference text” for any organisation wishing to credibly use terminology relating to net-zero emissions and create meaningful targets.

The UK Transition Plan Taskforce also published its first proposals for guidelines on what corporate net-zero transition plans should include to be classed as ‘gold standard.’ Large firms in high-emission sectors in the UK will be mandated to produce such plans in the coming months and some have already produced them voluntarily.

Saturday brought the first Farming Day to COP with decarbonisation a key part of climate mitigation. The news that Cambodia and Austria are now participants in the Agriculture Breakthrough initiative which covers more than half of global annual emissions and GDP was welcomed. There were also twenty-five new priority action areas for work in the coming 12 months. These include clarifying plans for ending the sale of petrol and diesel light vehicles, preparing to deploy hydrogen valleys, and laying the groundwork for net-zero industrial plants.

The Egyptian government welcomed the theme by launching ‘Food and Agriculture for Sustainable Transformation’ (FAST) – an initiative to increase finance flows to farmers alongside knowledge-sharing and policymaking efforts for sustainable food systems. THE UK has pledged its backing to this initiative.

The week ended with a poignant message to delegates – the science remains unchanged – 1.5C must be seen as a ‘limit not a target.’ Not enough progress has been made since the commitments of COP26., and negotiators must work with Governments and with the private sector if the world is to avert the worst of the climate crisis.