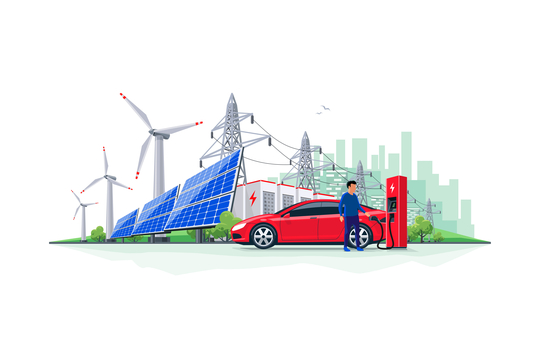 A new study has shown that the roll-out of Vehicle-to-Grid technology (V2G) could deliver network savings in the range of £412-£883 million per annum.

V2G technology enables electricity to flow both ways between the electric vehicle’s battery storage and the UK’s energy network. The theory is that the car can be charged when national electricity usage is low (i.e. when electricity is cheap), but also has the ability to export back to the grid at times of peak demand (i.e. when electricity is expensive). It is thought that this will help to mitigate some of the challenges which will arise as the economy decarbonises i.e. higher peak usage (from EV charging) and more intermittent generation (due to more renewables).
The study, which was a collaboration between E.On Drive, Imperial College and Nissan Motor GB, forecasts that the projected savings would stem from three key areas: lower investment in generation assets; less need for network upgrades; and lower balancing costs.

In addition to the cost savings on offer, the study also suggests that the roll-out of V2G-enabled electric vehicles (EVs) would help the UK to reach its emissions targets through reduced wind-generation curtailment, and less-reliance on flexible generation assets which are typically gas-fired.

The paper states: “Given that many vehicles spend a high percentage of time idle, both during the working day and overnight, V2G technology offers an ideal solution to ease grid capacity constraints and provide flexibility to the power system.”

The study was based on a projected sample of 1 million ‘back-to-base’ fleet vehicles being utilised between 2025-2030. On this basis, it remains to be seen whether or not such products will be marketed to lower intensity users. It does however show that the future uptake of EV vehicles will present significant challenges that will require businesses to adapt and innovate.

To speak to a member of the technical team about EV charging solutions for your business, do get in touch: