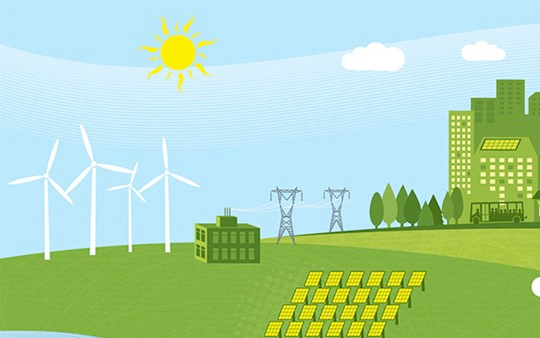 2017 was a year of surprises on many fronts and environmental policy certainly followed suit. There have been significant developments on the green policy landscape, for both the UK and the world, which presents a very different picture at the start of 2018 compared to the same time last year.

With an uncertain, confusing and potentially damaging domestic and global political setting in January 2017, the international community was in a state of unrest.  There was profound concern that the intentions of a seemingly irrational newly-elected US president would destroy the Paris Agreement before it had had a chance to make any impact. From a domestic perspective, the Government received endless criticism from the press and the green community due to delays to the long overdue legislative action on emissions reduction and the highly publicised air quality concerns. At the start of 2017, the UK was no further forward with plans to trigger Article 50 amid the myriad of warnings that were broadcasted over the perceived risks that Brexit posed to the UK and its required environmental actions.

Fast-forward to the present and while not all of these concerns have been addressed, the signs are far more encouraging. Donald Trump’s universally-condemned decision to pull the USA out of the Paris Agreement only galvanised the rest of the global community to move faster in its efforts to halt the devastating effects of climate change. A whole host of US states and companies displayed solidarity with pledges to defy Trump’s intentions. Also, China’s launch of the world’s largest carbon market sent a clear signal to the White House that the world remains committed to tighter restrictions of fossil fuel pollution.

Closer to home, the recent outlook for the UK’s sustainability agenda is also regarded on the whole as more optimistic. Landmark triumphs such as record-low offshore wind costs and the launch of the first subsidy-free solar farm point toward the realisation of the opportunities of the low-carbon transition, supporting both the creation of new jobs and continued investment in the clean energy industry.

The upturn in the UK’s green policy activities coincided with a cabinet reshuffle forced by the humiliating loss of the Conservative Commons majority which appears to have brought the arrival of several progressive figures into the ministerial fray. New Climate Change Minister, Claire Perry, has played an instrumental role in ensuring the UK’s voice remains strong on the international climate change scene. This was demonstrated by Britain’s leading role in the launch of a global alliance to phase out coal. Ms Perry has also been influential in raising the ambition of BEIS’s flagship Clean Growth Strategy, the long-term blueprint for the UK’s drive towards its future carbon budgets.

The appointment of Michael Gove to the role of DEFRA Secretary led to his ‘Green Alliance’ speech in July where he pledged to exploit Brexit to redevelop green policies that puts the environment first and his strong message has been matched by equally robust policy measures.

There has been a ban on bee-harming pesticides, a consultation on a plastic bottle deposit return scheme, and the promise of a new independent watchdog as a centrepiece reform to ensure a ‘Green Brexit’. The Government gave another boost to the sustainability agenda in July with a proposed ban on new diesel and petrol vehicles by 2040. This, alongside plans to establish a £400m charging infrastructure fund and an extra £100m in the ‘plug-in’ grant, has cemented the Government’s vision of a future British transport sector steered by low-carbon innovation. Major car manufacturers Volvo, Jaguar Land Rover and BMW all subsequently announced decisions to decarbonise their respective fleets.

As one of the four central pillars of the recently launched Industrial Strategy, it is clear that clean growth is seen by the Government as playing a key role in boosting the UK’s long-term economic prospects. Business Secretary, Greg Clark, announced that battery technology will be a primary focus with a four-year £246m investment set to provide a much-welcomed boost to businesses seeking to capitalise on the benefits of energy storage and the electric vehicles.

Despite all of this, there are key areas where green policy improvements need to be made in 2018. Currently the UK is in line to miss its fourth and fifth carbon budgets, the housebuilding sector needs a fresh approach since the axing of the zero-carbon homes policy, question marks hang over the future of onshore wind, there is no indication on how the renewable heat market will be revitalised and the carbon reporting framework seems likely to fall short of requiring any energy efficiency achievements. There is also Brexit. There are so many unanswered questions including whether the UK will remain a member of the EU Emissions Trading Scheme. It is hoped that the 25-year environment plan, expected to be published at the start of 2018, will provide clarity on a number of issues including these.

Much has been pledged to drive positive change and developments as part of the clean growth agenda. In 2018, the Government needs to build upon the policy frameworks it has established in 2017 and create a platform for the business community to thrive in a low-carbon, resource-efficient economy. As the New Year progresses, it is vital that the Government progresses its pledges to produce the post-Brexit environmental protection that its ministers have undertaken to deliver.