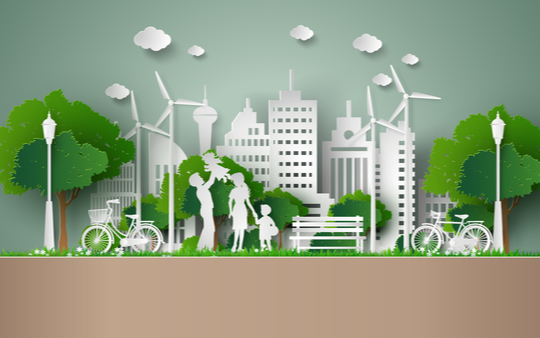 2020 is a year which will not be forgotten, not least because of the COVID-19 pandemic. However, the end of 2020 was also marked by some important announcements for climate change, including the publishing of the Sixth Carbon Budget report on 9th December 2020 which promises to showcase the UK as a leader in tackling the fight against climate change. The recommendations within the report are welcomed in strengthening the UK’s ambition and action regarding climate change, but also promise to stimulate economic investment and job creation at a time when there is a strong need for economic recovery due to the impacts of the global pandemic.

The carbon budgets were first introduced to the UK under the 2008 Climate Change Act. Each carbon budget provides a 5 year statutory cap on greenhouse gas emissions in order to set out a trajectory for the UK to meet its emissions reduction commitments, with the latest budget covering the period 2033-2037. The Sixth Carbon Budget itself represents a significant step forward in the UK’s drive to Net Zero Carbon and is being heralded as ambitious and the ‘toughest yet’ as it considerably steps up UK obligations, increasing the required pace of emissions reductions. Some of the key takeaways from the report include the following:

> Recommendation to commit to reduce UK emissions by 68% on 1990 levels by 2030, and 75% by 2035. Alongside this is a recommendation to ensure that the target encompasses all UK GHG emissions, including international aviation and shipping, which are currently treated separately by the UN.

> Development of a ‘Balanced Pathway’ which has been stress tested and makes moderate assumptions on behaviour change and technological innovation, whilst ensuring that recommendations can realistically be achieved when accounting for factors such as the speed of technology development and roll out.

> Identification of the need to strengthen adaptation plans and policies, as even if temperature rise is limited to 1.5 degrees C, there will be further impacts from climate change beyond those experienced today.

1. Reducing demand for carbon intensive activities – This covers measures which reduce demand for carbon intensive activity with particular focus on shift in diets away from meat and dairy products, reductions in waste, slower growth in flights and reductions in travel demand; alongside measures to improve efficiency in use of energy in buildings, vehicles and industry.

3. Expansion of low-carbon energy supplies – Low carbon share of energy supplies needs to increase from 50% to 100% by 2035. The largest contribution will come from offshore wind power. Low-carbon electricity can now be produced more cheaply than high-carbon electricity in the UK and globally. The CCC also sets out recommendations to scale up the use of low carbon hydrogen in areas less suited to electrification such as shipping, and potentially HGVs.

4. Land (and removals) – The 4th cornerstone of the key action areas is the transformation of land use. The report details the need to significantly increase the planting of trees with over 440,000 hectares of mixed woodland being planted to remove CO2 within the scenarios set out, along with both the restoration of peatlands, and the shifting of a large proportion of agricultural land to bioenergy production.

Importantly, the report also explains that rapid transformation is required across all areas and sectors in order to limit warming, with all of us as individuals required to play our part, stating:

“No single solution or single sector can meet the budget alone; action is required across all areas and all sectors, without delay. The 2020s are the crucial decade: with effective action starting now, by 2030 the UK will be firmly on track to Net Zero. A large part of meeting Net Zero is a technological and investment challenge. But it also requires a fundamental response from people: as consumers, workers, homeowners, tenants and landlords, motorists, farmers, citizens and families.”

Whilst the publishing of the Sixth Carbon Budget formalises the action required by the UK and provides the government with direction in its policy making, this sits amongst a number of key announcements made by the government from late November through to the end of the year to set the wheels in motion in terms of action.

Firstly, was the publishing of the government’s ‘Ten Point Plan for Green Industrial Revolution’ on 18th November 2020. As the name suggests, the plan set out 10 key commitments for ‘green’ development, with a strong focus on carbon reduction to tackle climate change. Some of the biggest commitments included announcements on the end of sale of new petrol and diesel cars and vans by 2030, increasing offshore wind capacity to 40 GW by 2030, and investing in the development of low carbon hydrogen production with capacity to reach 50 GW by 2030. Alongside this sits the promise of funding for a number of areas including nuclear power, clean public transport, Carbon Capture and Storage (CCS) development, as well as the setting up of funds for both innovation and research into zero emission international travel and shipping which are arguably one of the most difficult areas to decarbonise.

This was then followed by the publishing of the Sixth Carbon Budget referenced above. The report was produced by the Climate Change Committee (CCC), an independent board which advises the government on emissions targets and reports to Parliament on progress made in reducing greenhouse gas emissions. 3 days following the publication of the new carbon budget, the Prime Minister announced a commitment to reduce UK emissions by 68% on 1990 levels by 2030, which is in line with the report’s recommendation, representing a significant jump on the original commitment of a 57%. This was communicated by the government to the United Nations Framework Convention on Climate Change (UNFCCC) as the UK’s new Nationally Determined Contribution (NDC) under the Paris Agreement and shows commitment to the latest carbon budget produced.

Coinciding with this, also on 12th December, it was announced the UK will end support for overseas fossil fuel projects. This is a welcome, although somewhat overdue move, and has been a point of contention for some time, with many arguing that the UK cannot put itself forward as a leader on Climate Change whilst continuing to support investment into fossil fuels. The carbon budget also sets out the need for the UK to transition from the use of fossil fuels within its domestic policies, moving to the use of low carbon electricity and hydrogen. The announcement to end the sale of new petrol and diesel cars by 2030 puts the UK on course to be the fastest G7 country to decarbonise cars and vans, and a commitment has also been made for the government to also develop and publish its hydrogen strategy in the first half of 2021.

Finally, on 14th December, the long-awaited Energy Whitepaper was published. The paper promises to put in place a strategy that will decarbonise the economy; support a green recovery; and create a fair deal for consumers. The government believes that the measures will cut emissions from buildings, industry, and transport by 230 million metric tonnes, the equivalent of removing 7.5 million petrol cars from the roads. Some of the key commitments made in the report include the phase out of fossil fuel boilers and the transition to a new UK carbon trading platform, the UK Emissions Trading Scheme (UK ETS) which replaces the UK’s participation in the European Union Emissions Trading Scheme (EU ETS).

So what happens next in the wake of all of these announcements? There is much to be done to turn these commitments into action, and it is notable that the UK will also host the next UN climate talks in November 2021 so must be seen to ‘put its money where its mouth is’ ensuring both the funding and policy direction needed to translate these world leading plans into meaningful action. The CCC report advises that the Government must next set the Sixth Carbon Budget in law by the end of June 2021, with an urgent need for policies to be developed and put in place as soon as practicably possible thereafter. The CCC reiterates that whilst the Balanced Pathway set out is achievable, it is highly ambitious and there is no time for delay. 2021 therefore promises to bring further detail, strategy and policy resulting from the end of 2020 announcements and commitments. This is absolutely necessary if we are to meet the legally binding 2050 Net Zero Carbon target.

In the meantime, many of our clients have been leading the way by setting their own Net Zero Carbon targets ahead of the impending government legislation. To find out how we can support your business in developing a Net Zero Carbon strategy,  please get in touch to book in a COMPLIMENTARY CONSULTATION.