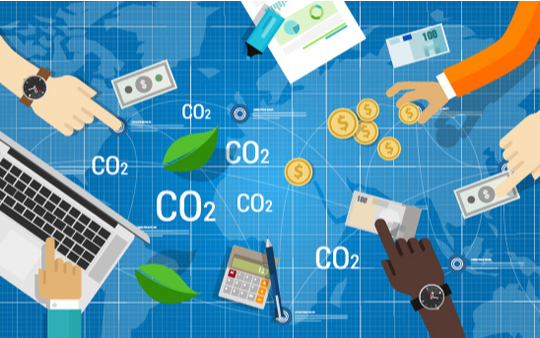 The Government has unveiled plans for the future of carbon pricing within the UK. The initial proposals are mainly in-line with expectations and seemingly ensure continuity in carbon pricing as we exit the Brexit transition phase at the end of the year. Furthermore, the plans cement the UK’s net zero ambitions by cutting the number of available carbon allowances under the current system.

The UK currently operates within the EU Emissions Trading Scheme (EU ETS), a market-led platform for carbon trading, whereby participants (power stations and other energy-intensive users) must purchase and then surrender enough emissions allowances in order to cover their carbon output. The EU ETS covers 45% of the EU’s greenhouse gas emissions and operates on a ‘cap and trade’ basis, whereby the total number of available emissions allowances is capped and the cap is then reduced over time.

The UK Government’s proposal is to create a UK ETS, which will operate as either a standalone system or will be linked to the EU ETS “if it suits both sides’ interests”. The policy document re-iterates that the Government will publish a consultation on a ‘Carbon Emission Tax’ to ensure that the cost of carbon continues to be priced into markets even in the event that the UK exits the Brexit transition period without a deal.

Perhaps the most interesting component within the Government’s plans is that, in order to help meet it’s net zero ambitions, the UK ETS will initially set it’s emissions cap 5% lower than was planned within the EU ETS. Moreover, the plan is to further tighten the cap by aligning it to a net zero trajectory by no later than January ’24.

Energy Minister Kwasi Kwarteng said: “This new scheme will provide a smooth transition for businesses while reducing our contribution to climate change, which is crucial as we work towards net zero emissions by 2050”.

In the UK, unlike many European markets, the cost of carbon is included within the wholesale electricity commodity price. Thus far, the Government’s announcement hasn’t had any notable impact on wholesale costs despite the likely reduction in the UK’s nominal allowances available from the start of next year. The markets will however be closely watching for future news on UK carbon pricing, as there remains a significant array of potential future scenarios that could have a major impact on pricing.